It’s Too Late To Turn Back Now

Thursday morning X and I arose with that anticipation I just can’t begin to describe. I knew he was nervous but he wouldn’t admit it. Shit, I was nervous. We pulled out the directions and began our drive west. I kept wondering what made us think this was a good idea – to go to a house with his birth mother (who we never met) and all his relatives (who we also never met) and spend Thanksgiving there, but whatever. I’d like to say here that X and I don’t really do anything half-assed, that we think everything out in full detail, but that would be a colossal lie.

(Note to X who is thinking, “What is she talking about? We don’t do anything half-assed!” Okay X. Think about all the conversations we have where you end them by saying, “Well, we’ll figure it out.” Honey. We NEVER figure it out. We just fly by the seat of our pants. Oh! Pants! Reminds me! Back to my story!)

As we get within 15 minutes of the house I had a sudden urge to chop and snort all my Klonopin. But I resisted. I did, however, desperately need a Diet Pepsi. We stopped at 7-11.

X and I went inside and I went to the bathroom. I came out, poured my soda, paid and we left. As we were putting on our seatbelts, X said, “So, what would be the worst thing to happen to me 10 minutes before pulling up to my birth mother’s house?”

“Well, I somehow managed to get the after-pee leakage on my jeans.”

“OH MY GOD OHMYFUCKING GOD NO NO NO! ARE YOU KIDDING?”

I looked at X’s crotch.

X said, rather calmly, “Well. No. I’m not kidding. So I tried to dry them under the dryer in the bathroom but then someone came in and it just looked like I was trying to fuck the dryer hole, so I left.”

“This wouldn’t happen to you if you learned how to wear underwear! Now what? You’ve waited all these years and we have to drive in circles waiting for your jeans to dry?”

People, I wish I was kidding, but no, I’m not. This is me and the love of my life. Half assed and wet crotched until the end.

This time I took a picture… 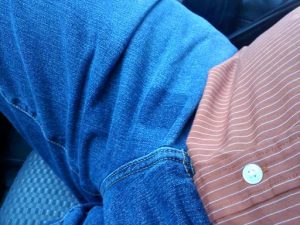 In all seriousness, when we pulled up to the house, I was just so proud of X – so proud he did this. Ok, must stop gushing because he’ll be grossed out and embarrassed by my gushing.

Anyway, I don’t think that the visit could have gone any better. Without going too far into any detail – they all knew about him, and they have all been looking for him for a while. But they were missing a key piece of information that X had – the name of the agency where he was placed. For a bunch of reasons, that information was never divulged to his birth mother because she went through a third party. So she didn’t know, and no one knew, and there you have it. They searched for him on the internet and didn’t get very far. Until now.

And so X has a whole family now, the bonus of which might I add? THEY’RE NOT GREEK! Oh my god, he’s out of the cult and he left me here alone!

His pants finally dried, by the way.

X: The Love of My Life