It was only a matter of time. Now we know that people have been killed for using Craigslist.

Warning: Using Craigslist may be hazardous to your health.

Generally speaking, anything you find on Craigslist should be tossed back like a hot potato. There are a few exceptions, but very few. I’ve become obsessed with this story. I cannot stop reading the news on it. I’ve dragged Cube, Phil and Hammer down with me.

I love when people say, “Oh it couldn’t have been him, he is such a great guy!” That’s my favorite part of the news whenever some idiot unravels and does something really stupid – all the idiots who come to his defense. Besides, I bet there were warning signs.   Think of all the times Sideshow Bob got loose and tried to kill Bart Simpson?   About 40% of the people I know right now who could snap and murder someone. And   when they came to interview me? I’d be all like, “Yep. I knew that mofo was going to slit someone’s jugular one of these days. I’m just glad it wasn’t me!”

A simple little name search for Philip Markoff on The Wedding Channel turns up their registry.   Because Pottery Barn yanked their registry list (I really wanted to see the Ginsu Knife Registry anyway) and because they pulled down their website AND their cache, I don’t have a lot to go on. Which brings me to a digression…how are they smart enough to get their website down and yank the cache which necessitates knowing the html code, yet, the idiot was too stupid to mask his IP address when soliciting hookers?

Anyway, one would have thought his fiancee would have been slightly clued in after what she wrote on their “story.” Right now it’s not rendering well in IE, so if you have Firefox, you’ll need to use that.) 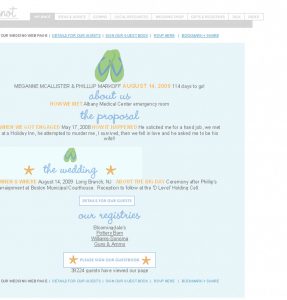 Credits go to Phil for the “Editing!”

*By the way – people kept signing their guestbook last night and then getting deleted.