Part 2: Well It’s Too Late, Tonight, To Drag the Past Out Into the Light

I met K when I was 24, in December, 1997. We instantly fell in love and even though he lived in Atlanta, I packed up my crap and left the city that never sleeps for Dixie.

K and I celebrated our four year anniversary by breaking up. Well, this was the first iteration of that plan, anyway. We had lived in Atlanta until April, 2001, at which point we hit the road in search of a different life. A different life meant one which included less southerners. Hitting the road meant we quit our jobs, put our things in storage, and drove cross country, with a puppy Sammy and a one year old Thora. Pause for the cuteness nestled in the back  of the Ford Explorer: 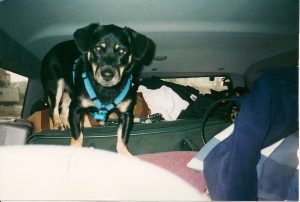 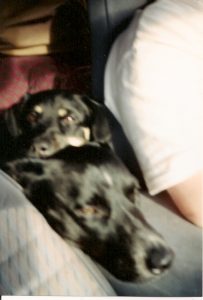 “I’ll roll up my own window mommy.” 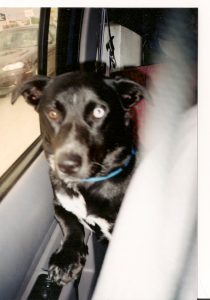 When we left Aspen, I turned around to look at my puppies. Sammy was gone. I started shrieking like a lunatic. K said, “But he got in the truck.” I was screaming that he wasn’t in the car and to turn around. K looked in the rear view mirror and spotted the eyebrows. Sammy liked to sleep in the luggage compartment. 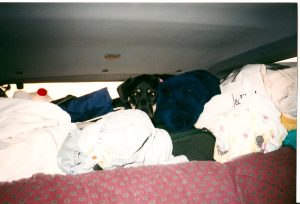 “Oh Sammy? What are you doing back there?”

We were somewhere in Wyoming in the middle of an August night, driving on a steamy stretch highway and K was sleeping in the backseat with the dogs, when I first suspected our relationship might be over. There were deer on both sides of the road and I was freaked out that one would jump in front of the car. I kept clicking the lights to bright, then back to regular if a car approached. K heard the clicking and got up to ask what I was doing. I explained to him about the deer.

K: That is going to make it worse, because deer are more likely to jump out in front of the car if they are startled by brights.
V: But I can barely see 10 feet ahead of the car without the brights!
K: That’s fine, that’s all you need.
V: Not when I’m going 70 miles an hour!
K: I can’t sleep. I’m exhausted. Please just stop doing that.

K went back to sleep and I said to no one in particular, “That’s the problem here. I’m trying to look far ahead to the future and he’s only looking at the present.”

That was probably the beginning of the end for me. September brought our trip to an end and it also brought September 11th one week later. We had decided while on the road to move to Maryland so I could go back to Grad School and once and for all, get my MBA. I was starting in January, 2002, so we wanted to settle in as soon as possible. Once the towers were hit though, I figured our economy was going to crash with it. For reasons not entirely related to going where the jobs were, I continued on (with my things, and the dogs) to Maryland while K stayed behind in Atlanta. We each had jobs; they were just jobs in different cities.

I ended up hating my job in Maryland and considered going back to the familiar. K’s mom said, “It’s not so bad if you say you had a change of heart and just decided your home was in Atlanta.” It would have been so easy. So unbelievably easy. But sometimes the easy road isn’t good.

The fall brought a change of leaves I hadn’t seen in years, due to being down in Dixie. It also cooled my feelings for my relationship. And it also brought me to make a very bad decision – I cheated on K with a man named Jack. It was less of the one-night-stand variety of cheating and more of the full-blown-relationship cheating. I’ve written about Jack here. The details are still hard because I know what pain I caused by that selfish action. I have a few regrets in life – and one is cheating on K. No one deserves that sort of pain. Somewhere in my teen years I was cheated on, and since then I adopted this attitude of making sure I cheat in almost every relationship. I felt like it was my ace in the hole. It’s a losing bet every time. And to do it to someone I loved? Horrible. Absolutely horrible.

By the end of 2001, I was headed back to Atlanta to take care of the breakup in person. K sensed this was coming. They always know, don’t they? That’s when they pull out all the stops. Four years in a relationship where the best present I got was an incredible hit of acid, and now he busts out the diamond necklace. I couldn’t accept it. I’m not a material girl. I returned the necklace, and we broke up.

In January, I would be starting graduate classes at school, in a new relationship, in a new city, and I would also be starting a new job. It was enough change to bring on a full depression.

The job would be with a Land Developer. I was probably more excited about the job than anything else. The aforementioned Jack was a Construction Manager and our brief time together taught me that I liked his job more than my own at the time. I marched into a placement office and announced: “I’m going back to grad school full time and I want to work 30 hours a week for a construction business. What do you have?”

“We have the perfect job for you, working for a great guy.”

V and X Falling in Love, Velvet in Dupont

V and X Falling in Love