Well, I really did it this time. I made that bacon cake and had a little party for Thora with a couple of her little neighborhood doggie friends.   I haven’t managed to keep a goldfish, hamster or chinchilla alive anywhere near their expected lifespan. So this? Thora’s 10th Birthday? This is a big deal.

Last year I bought her a cake from one of those fancy dog places. Twenty bucks down the garbage chute. She hated it. I couldn’t even carve into it. I think they tried to pass off a week-old cake on me. It was gross. Even Sammy wouldn’t eat it, and that is rare. Sammy has never met a morsel of food that he didn’t like.

This year I wanted to make her a cake. I googled and found recipes, but this one sounded the best:

Mix everything together except the yogurt/cream cheese and bacon, beat for 2 minutes, put in two 8 inch rounds and bake at 325 for 60 minutes.

When the cake cools, frost it with the yogurt or cream cheese, and layer bacon in between the tiers. Yum yum. 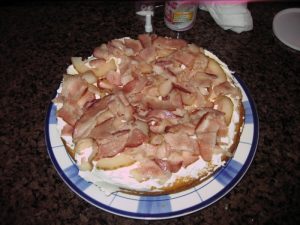 The dogs, by the way, will look like this during this step: 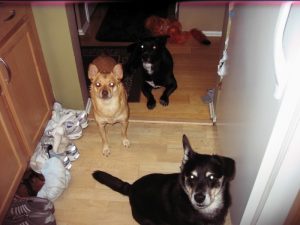 Then you put the top part on to the bacon and cream cheesed part and frost the rest. Then you can have some fun with it. 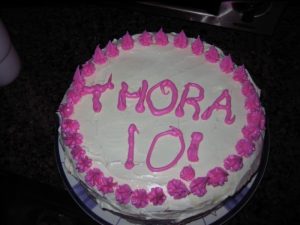 I used Puperoni sticks for candles. But obviously I didn’t light them.

When we unveiled the cake, X said I should just put it in front of her. So I did. She went for the Puperoni stick first.   Then she went after the “T” in Thora. Ted helped. 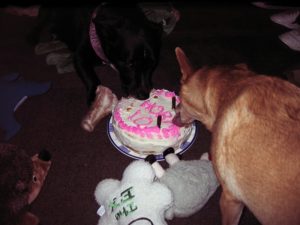 The other dogs, my Sammy and Ester’s Dudley, were both rapt with their marrow bones, and didn’t realize “cake-gate 2009” was happening just a few steps from them. 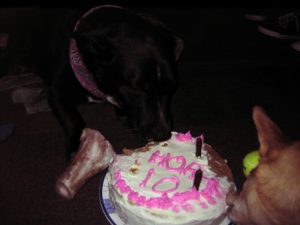 So we cut some pieces off for Sammy and Dudley and let them share in the cake goodness. X’s human kids, Number 1 and Number 2 thought they were going to get to try the Bacon Cake. But they renegged when they heard “baby food” as an ingredient.

After her plate of meat and her bacon cake, and her new presents, Thora was sufficiently pooped. Too tired to move. Poor baby. 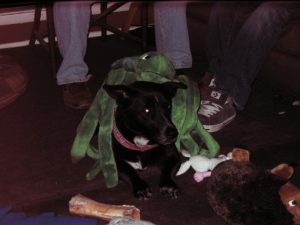 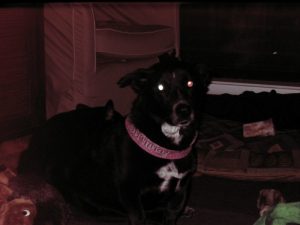 In other dog news: Homeward Bound is doing another adoption at PetSmart this week in Potomac Yard. Today from 3-6, Saturday 10-6 and Sunday 10-5. Come rescue a dog instead of going to a breeder! Mutts and strays need love too!