That Frozen Concoction That Helps Me Hang On

X and I decided on a whim to leave town. We started discussing wedding, plans, and going away and realized that we weren’t going to be able to fit it in after the wedding. So we took the dogs and went to the Keys.

When I finished grad school several years ago, I found this place in the middle of nowhere in the Keys that allowed dogs and they could be off leash. I went down there and had the time of my life doing absolutely nothing. So X and I made arrangements to go back and while I was worried because there’s not a lot to do there and X needs constant entertainment, it was paradise. He loved it, I loved it, the dogs loved it. As we always do, we started talking about buying a place in the Keys and how nice it would be to live there. We always talk about that, wherever we go. Aah, if only money weren’t in the way.

The owner of the place came outside one night and we asked him to have a drink with us. He said he only drinks scotch. So X told him to go grab his scotch. He goes inside and comes back out, not with a little highball glass of scotch. No, that drunk comes back with a 16 ounce glass of scotch, filled to the top. No wonder he passed out on the patio every night and his wife had to drag him to bed! What a way to live.

I’ve had a lot of anxiety about getting married. It’s funny to get to a place where you finally feel ready and then, you get scared. I always said no one should get married before 35, but now, as I’m on the other side of that by 2 years, I think I’m revising my former sentiment. I think younger than 30 is still too young. But if you get married after 35, you’re set in your ways. It’s a difficult adjustment to think about consolidating households and merging lives. Not impossible – just an adjustment. Now I think that perfect window is somewhere between 30 and 35. At least for me I suppose.

We spent 2 days driving home and Sammy almost got himself molested at a rest stop. Some creepy guy got out of his car, had no shirt on, and had pants that were just hovering above his pubes on the front, and exposing full butt crack in the back. X said when I was walking the dogs the molester saw me and was just watching me with the dogs, and didn’t realize X was in the car behind him and that we were together. When we started walking back toward the car, the molester tried to get Sammy’s attention and I just knew that nosy little dog was going to go over and get all of us kidnapped and thrown in a basement somewhere. But that X. He saw it all unfolding, and jumped out of the car and shuffled me and the dogs in real quick. When we were driving off, we saw the molester had a security uniform in his car. Ugh. No telling what he’s up to.

X wanted to drive straight through to home, but I wanted to stop. Of course we picked the worst place to stop because there were like 3 family reunions in that town that weekend, so the hotels were all booked. We finally got a room in the far corner of a hotel, in the woods under a broken down billboard. It was scary. Of course, I have a low bar for what I find acceptable accommodations. This is honed from years of experience in the Velvet Family, where my dad made us stay at the most disgusting places you could ever imagine. I remember we stayed at this Thunderbird Motor Lodge once and my brother, the family elitist, was comatose for 3 days. This of course is the same brother who won’t eat at Denny’s, IHop, Waffle House, Huddle House or anything along those lines because they are dirty, gross, and have sticky syrup everywhere. He makes me laugh my ass off.

Because it was a bit scary, I slept with that “one-eye-open” thing. I felt like I couldn’t really relax, and questioned whether X was right and we should have just pushed onward to home. We woke up at 6 a.m to all this banging, and the stupid New Yorkers next door to us were leaving. We got to hear their entire conversation, as well as their door slamming over and over as they went in and out, packing the car. Just when it was almost over, and they were about to drive off, one of them had to take a shit, which he announced so loud they probably heard it up at the next exit. Shoot me. Really.

Anyway, here they are, my little muffins, doing what they do best. Lounging. 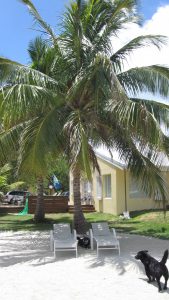 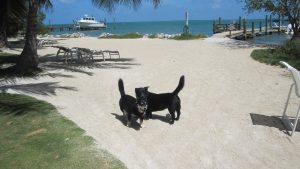 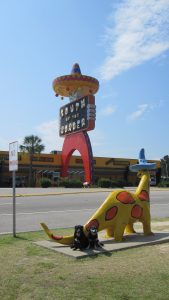