Searching Everywhere, You Turn and Swear, It’s Always Been There

I wish I could give you a blow by blow detail of the wedding, but sadly, it all blew by so quickly that I barely remember anything. And I only had a couple beers.

When we caravaned to my parent’s house on Thursday, X’s mom was so pleased to meet my mom – a fellow Greek. X’s mom is just beside herself that this wife (cough, ME) is Greek. They had a grand old time those two. But because Number 1 and Number 2 went to bed at 5:15 a.m. Wednesday night, and we woke up at 5:30, they needed naps upon our Connecticut arrival. They went back to the hotel, and my mom went into mom-mode.

“So, you promised you would take that thing out of your tongue when you got married.” (I’m not exactly sure why I promised this to my mom, maybe because it represented the last vestige of my crazy single life.) I reached inside my mouth, unscrewed my tongue ring, and handed it to her. She laughed and said, “GREAT!” and threw it across the kitchen. Who knew that bothered her so much?

What was bothering me was a sudden appearance of two bruises on my right arm that looked like Lyme Disease. The entire family gathered around my arm trying to decide wtf was going on. Then I said, “Oh, can we also discuss this?” At this point I showed them the zit/goiter/new planet that seemed to take hold on my jawline. Ugh. My mom thought I was breaking out in hives. No amount of makeup would cover this.

X and I had a plan. The hotel/restaurant where we were having the wedding cost a fortune, so we blocked rooms at a Hilton in the next town. Thursday night he stayed with Number 1 and Number 2 at the hotel, and I slept my last night in la Casa Mommy and Daddy with my brother, the Elitist, slathering zit medicine on my goiter-zit, every hour on the hour. The next morning he and I inspected the zit and thought we did pretty well. I figured the rest of the roadkill could be covered with makeup. Then I went downstairs and my dad said, “WHAT THE FUCK HAPPENED TO YOUR NECK?” Great! It metastasized! And the oldest guy in the room saw it first. Not. Good.

Back to the plan. X was going to dress at the Hilton, I would dress at our wedding location, and we would meet on the deck to get hitched. No. Such. Luck. My half hour makeup appointment went in excess of 90 minutes as the entire staff at the MAC store attempted to cover my lyme disease and the puberty-redux happening on my neck. When I got back to my parents house, my dad had hijacked my friends from Atlanta after picking them up at LaGuardia and had them at the kitchen table eating sandwiches. At 4:00!!! When the wedding was at 6:00!!! And all the vendors were at the hotel!!! And X isn’t. And neither was I! Where the hell did the day go? Then just as I got to the wedding location, X calls and says he was almost there, and realized he forgot his suit. He had to turn around and go back to the other hotel to get it. When my mom showed up she was like, “Oh my God can anything go right right now?”

I went downstairs in my bathrobe and put out the placecards and the table identifers. We used Greek Islands instead of numbers. But because each table had a different number of guests, I had to sit there and count. “Okay, this table has 10 places set…this is the Rhodes table….okay lay out cards for people who I put at a 10-top…” and so on. The waiters thought I was the Wedding Coordinator, the Event Manager thought I was the bride’s sister and I was thinking about finding some narcotics, crushing them and rolling around in them on the floor I was so freaked out.

The photographer and I had a few nice moments in the room before the melee. First Mommy. Then Daddy. Then my brothers…friends…nieces…dogs….X. We literally got dressed in front of 10 people, with cameras snapping all over the place.   There is clearly nipple (mine) on the video. But I wouldn’t trade that part for the world, because here occurred what will no doubt lead as one of my most cherished moments in my life. Once I got my skin tight dress on, I realized I couldn’t bend to put on my shoes. Without prompting, each of my nieces took it upon themselves to grab a shoe, and put it on one of my feet. I should mention my nieces are 3 & 1/2 and almost 5 years old. And I should also mention that my shoes tied around the ankle and had a belt-like strap that had to be poked through a hole.

A lot of you have read this blog for 5+ years and know that I have never posted a picture of myself. I’m changing that rule because this picture absolutely must be shared. 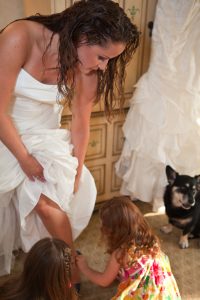 Here’s where I’d like to say that the rest of the night was fantastic, however, that would be a lie. Let’s see…how shall I put this?

I fucking fell down the stairs when I was going down to get married. In front of everyone – my mom, dad, brothers, sister-in-law, nieces, X, X’s mom, X’s two kids, the photographer, they all saw. And we all laughed. It’s on video. When I watched it I was like, “Damn, I went DOWN!” In my mind I had only slipped a bit. Nope. I really ate it.

Friday was a complete blur. Seriously. There are definitely regrets and things I would do different, but honestly – I would hire a freaking videographer if I had this to do again. X and I felt like with a wedding of 30 people, that having a video camera in people’s faces all the time would be a hassle. They wouldn’t have a lot to film if they only had 30 people to rotate through. Plus it was around $2000 for the night and that just seemed like money wasted. Now? I really screwed that up. I would hire 20 videographers if I knew that the entire night would zip by me without me even realizing it. Barely ate, barely drank, and barely feel like I talked to anyone. I even forgot to dance with my dad. Please. I know. Don’t get me started. I cried the whole drive back to D.C. over this yesterday. My nieces were just loving the wedding, and my focus suddenly became on them, to the exclusion of almost everyone and everything else. Kids are really a time vortex.

Anyway, my photographer is working on the pictures, but she sent me her favorite. 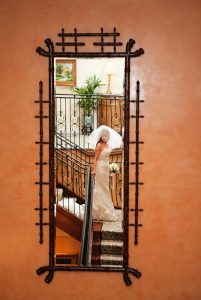