X and I have too many places to live and not enough jobs so we had to jettison his place in the burbs. He is supposed to be moving in with me this weekend. Supposed to be.

I know what you are thinking: What is this unconventional bullshit marriage where he lives in one state and she in another? Yes yes, I know. But for reasons that make sense only to us, (kids/schools/commuting issues) we decided to split our time in this fashion. My place is pretty small so I can’t exactly say I’ve been aching to have him move in with me. I was hoping that one of a few things would happen.

Kids, not only is getting a job in NY a damn near impossible feat when you’ve spent your career in real estate, but I think that the market up there has officially gone into hibernation for winter. Any lead I had for a job was “put on hold.” And I don’t want to take a job that is tenuous, I want something that is going to last, because I am not trying to break any records for having qualified for unemployment in the most states.   But, because there are kids, and schools to think of, we may have to go this summer no matter what. Of course I know what will happen. I’ll have a bunch of clients here and I won’t be able to leave. X and the kids will move up there and wait for my visits.

See. Everyone fucking gets to move to NY except me. I’ve been saying this for years. It’s really starting to piss me off.

Anyway, back to this move. We had everything scheduled for this weekend, and today the god damned elevator finally said “enough.” It’s officially sleeping for at least 10 days. I can’t say I blame it to be honest. I live in a building with a few dentists, and that elevator brings their lazy asses from 1 to 2 from 2 to 1 all. day. long. oh. my. god. take. the. fucking. stairs.

Normally the elevator thing wouldn’t bother us. In fact, we already got a bunch of boxes down to the car so we can get them out to Delaware. But we have to get my sleigh bed out, plus mattress and boxspring, and get his platform bed up here. I still didn’t draw the line here. I was willing to do this up and down the stairs. It’s at this point where the straw broke the camel’s back.

Oh? Have I not mentioned the chinchillas?

Arrgh. I cannot bring those monsters up the stairs in their cage. If we don’t keep the cage upright their poop will fly out and frankly, with the way I expect to be bitching, there’s a chance I’ll get rodent poop in my mouth. Then there’s the possibility that someone won’t have a good grip and they’ll go flying back down the stairs. So, no, they must be moved in the elevator.

They are so freaking cute but 2 people, 2 dogs and 2 chinchillas.

I actually figured out we can just barely fit them in, but it involves storing furniture in the fireplace. I wish I were kidding.

Hey. Does anyone want 2 chinchillas? I don’t want to give them away but X is making me. 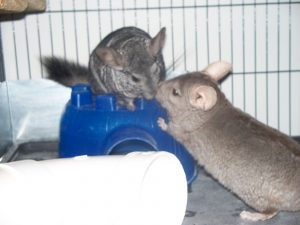