Well Tonight Thank God It’s Them Instead of You

My brother and I have decided not to exchange Christmas presents this year.   Instead, we are going to help someone in need. You know how they have those Christmas Lists that kids write and they get printed in the paper? Well, we got way lucky.   My brother found someone’s Christmas List on the Metro North, while commuting from NYC back to Connecticut! Actually, the guy who was sitting next to him forgot it when he was collecting the rest of his fancy Wall Street Investment Reports and got off the train in Mamaroneck.

I would like to propose that we all band together and get this poor girl the items from her “dream wish list.” I think this girl has really and truly embraced the spirit of Christmas. Her boyfriend already put notes next to everything so some of the legwork is even done for us! 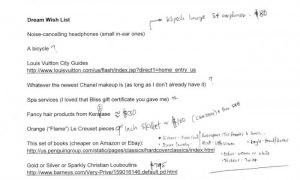 Let’s pause for some commentary. I like how her poor, obviously long-suffering boyfriend, put a question mark next to bicycle and “whatever the newest Chanel makeup is (as long as I don’t already have it.)” What is this guy supposed to do? Look through your makeup bag, take notes, and then go to the counter and say “Give me everything newer than this?” I also love that she misspelled Kerastase and he inserted the “S.” He seems detail oriented. (I have a theory that there are two types of people in the world: Detail Oriented and Big Picture. Detail oriented are the ones who crunch the numbers, dot the I’s, cross the T’s, and make sure the bills are paid on time. They are your Assistants, Associates, Analysts, etc, and they do not typically make a lot of money. The Big Picture people are the geniuses who see the path to success, the ones who can make it all happen, the movers and shakers. A Big Picture person would dispense this nonsense list to his assistant to handle so he could go off to make more money.) I think “Ivana More Stuff” set her sights on someone who may not be able to pay for her lofty ambitions.

She also wants Louis Vuitton City Guides, which you can clearly get on the cheap by another publisher. Has she heard of Fodors? Frommers? Phonies? Okay, maybe not that last one. But, she wants classic literature cheap. In fact, that’s the only thing she is price sensitive to. Poor Dickens is rolling over in his grave right now.

Oh, and speaking of things that fit, on to the shoes!

I would love to post a picture of the Louboutins, however, those fuckers defied all previous fashion norms and managed to copyright that stupid red sole they have. I worked in Fashion for a few years and this is unprecedented! Designers just had to live with being knocked off. So, anyone who posts a picture of their shoes gets slammed with a copyright infringement notice. I will, however, give you this link. 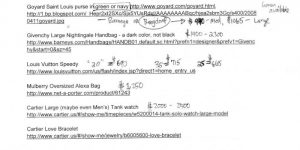 The purses. This bitch is so into purses. Men, please listen up. Any girl who obsesses this much over purses at this price level is wasting your time. There will always be some new, fancier, more expensive purse she needs to have – and don’t think it ends there. If $1000 purses don’t keep her appeased, she’ll be trading you like yesterday’s Louis in no time.   And if she’s spending all her time making lists for you with links to all the places you can find such purses, guess what she’s not doing? Yeah that’s right big guy. You’ll have to figure out how to make that thing throw up all by yourself.

I had to check the price on the Cartier Love Bracelet. While Cartier won’t give you prices, it does appear it is $6200 according to other websites. Yowsers. Honey, I know you’re living in a bubble…a purse and Cartier filled bubble with your noise canceling ear phones on, but we’re in a recession. R E C E S S I O N. Do you know how many people will claim less than $6200 in income this year on their taxes? Probably one for each perfectly coiffed hair on your head. 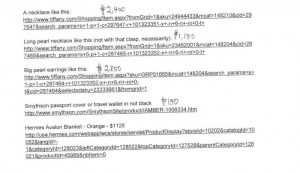 My dog and I are currently sharing a chenille blankie that set me back $29. I’m warm though. I wonder how much warmer I would be if I were under the fancy Hermes Orange blanket. Would I be $1096 warmer? I dunno.

All right. So we have a plan laid out in front of us. If 150 of us can each contribute a dollar to this poor thing, we can buy her the Smythson Passport Cover.