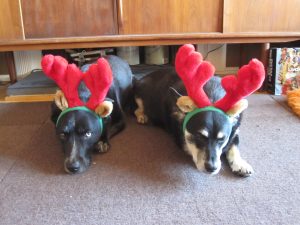 Merry Christmas from Sammy, Thora and I. If they would have just sat up like I asked…you wouldn’t be able to see that I have paint cans stored in my fireplace, and that my sideboard is in front of the fireplace. We had to do some rearranging to fit the chinchillas, who, by the way, don’t say Merry Christmas. They are too busy in their dust bath, where they have been for the past hour.

X (my husband) asked me yesterday what the title of my previous post meant and I think I was shocked. It’s a line from “Do They Know It’s Christmas.” All my titles come from song lyrics.   I thought the last post was obvious given the time of year and how often that song is being played. Oh well.

Anyway, my implication in the choice of title is not that we need to spread all our money all over the place and take care of everyone, but the recession and bank bailouts are still pretty fresh in everyone’s mind. Sympathy runs low for people who (may or may not) have thousands of dollars to spend on a purse when other people are suffering tremendously. Is it unfair to tell someone what they should or shouldn’t do with their money? Sure, in theory. But many of these people came by their wealth in not so honest ways. We found out a lot of people lied about a lot of things where other’s livelihoods were at stake and their own personal ones only stood to gain wealth because of it.

Remember how after September 11th, people were just nicer for a while? Eventually people returned to their former ways because you can’t grieve forever. But the recession is still happening. And it’s not going anywhere just yet – at least not for most of us. Most of us are still under water. Hopefully 2011 is better for everyone, and maybe next year if we find the same Christmas List on the Metro North, it won’t be as much of a shock.