This Race is for Rats

I understand that my work dramas have become a source of entertainment for you. I’ll have you know though, that I am currently shifting my mood to the darkside. Yes, I’ve decided that this place is just the right combination of hilarious and dysfunctional that it might be a place I can call…home.

Let’s review my last five days at the Vortex.

Wednesday we found out that through an acquisition our company will quintuple. But we’re only hiring a couple more people. Yay.

Thursday I got to work and saw this in the parking lot. 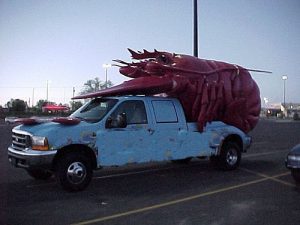 You didn’t need anything else from me on Thursday, did you?

Friday I received a phone call 5 minutes before I was going to leave saying that “this, this and this” need to be finished before you go. Christ.

Monday I had to return 45 phone calls being directed to me now because of some other drama, each call taking between 10 and 12 minutes and each call being the same exact conversation. In addition, I received an email that “this and this” (unrelated to Friday’s “this and this”) needed to be done by close of business Monday. The “this and this” will take approximately 4 days to complete. There were 6 hours left in the workday when I received this email. I responded: “It’s nice to have dreams.”

Tuesday a meeting was held in the conference room next to my office. I distinctly heard someone tell the person who reports to them to do something. Then I distinctly heard that person throw everything down and proclaim, “NO! I’M NOT DOING IT! IT’S NOT MY JOB!!!” Then she stormed out of the office. I’m still unclear as to her current employment status.

The Office, Velvet in Dupont